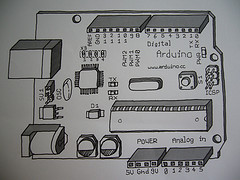 The discipline of rhetoric is often associated with speech or writing, but how can we use computational machines to persuade? More than this, how do computers persuade us? In this class, we will practice digital rhetoric by arguing with computers. This means that we will build computational objects (using the Arduino and Processing platforms) in attempts to persuade others. However, we will also consider how we often find ourselves in conversations with computers. We argue with computers just as we argue with a keyboard or a pencil. But we also argue with computers much the same way we argue with a debate opponent. Throughout the course, we will explore how we might use computer hardware and software to get audiences to think differently about physical space. We will examine how computational machines cut across most any contemporary environment, and we will compose and design our own machines in an attempt to shape environments and persuade others.

This class meets with Elizabeth Demeray's Kinetic Sculpture class, and students in both classes will collaborate on physical computing projects. No programming expertise is required for this course, and students will be offered the opportunity to learn and tinker with various platforms.